Viau slaughterhouse & butchery; four generations of a family, serving the area
by Benoît Bleau, translation Nushin Nakhjavani
In 1951, paternal grandfather Siméon Viau who farmed in the region and would slaughter animals for his own family’s use, decided to set up a butcher’s shop. He did this with the help of his seventeen year old son Lucien as apprentice butcher. Initially, they would work on one single animal each week but as the years passed, they modernized the operation and expanded the business to meet increasing demand.Today, Viau handles 15-30 steers (beef), around 100 pigs (pork) and several sheep (lamb), each week.

Come 1975, Lucien’s brother Paul joined the business and then in 1979, Lucien’s eldest son Richmond, 18 years old at that time, joined to make up the third generation of the family. Lucien sold his share of the business to his 3 children, so Danielle and Benoît joined Richmond as partners in 1985. In 1991, Paul handed over to a new partner in the firm, An- dré Bolduc, a friend and longstanding employee at Viau`s.Then in March 2010, Danielle bought out her two brothers plus André and together with her husband Christian Barbeau and their son, Jean-François carried the business into the fourth generation of the family.

The slaughterhouse, inspected and classified as an `A` category establishment since 1979, has in succes- sive stages come to include a butchery, a food processing operation and a smoke house. Viau is well known for blood sausages (boudin), hams, traditional smoked bacon, sausages bursting with an array of flavours, cooked meats and prepared dishes such as baked beans (fêves aux lard), meat sauces, kebabs and much more…This year, Viau and all its 20 employees will celebrate 60 year of ongoing success, both in Quebec and across the border to the south. Given the current trend in over-specialization in this type of industry, the citizens of Hemmingford are extremely fortunate to have such a fine example of so much delectable variety, close by. Also, the current owners of the business have made it a point of pride to exclusively handle locally raised animals, from small scale livestock farms, free of hormones and antibiotics.
Congratulations and a long life to the entire team! 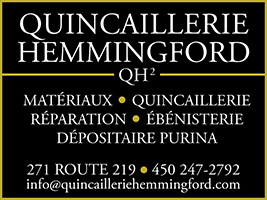